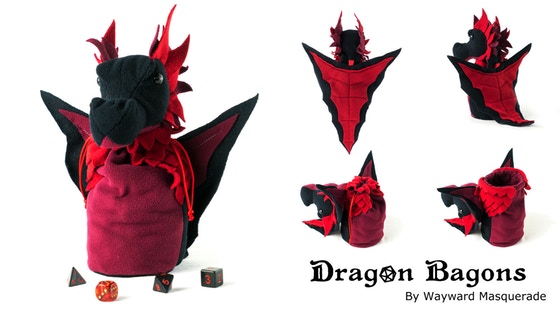 Ok, so we've finished the majority of the drakelings, there's about a dozen that need to be finished. We had an interesting mishap, there were two drakelings got their spikes mixed up. Those two were immediately adopted by my helper, and we're making replacements.

I'm hoping that the sample from the cutters will arrive today, otherwise it will be monday. We decided to have the pumpkin spice dragon bagons cut out as the sample because they're all the same so it's simpler to get a batch done, and so I can get an idea of what (hopefully nothing) needs to be cut by hand.

Once those arrive I'll work out what needs to be cut by hand (fingers/toes/arms/eyes crossed, hopefully nothing), then we'll sort out the bulk cutting and any hand cutting. The goal is to get both the double size and standard size custom colour dragon bagons bulk cut.

The manufacturers have received my sample and are working on sourcing fabric at the moment :).

The dice manufacturers don't seem to be able to open any attachments I send them so I'm going to try dropbox when they reply and see how that goes. I've narrowed the potential designs down a little bit.

This isn't a full update but I wanted to just add a few bits and pieces.

The very first Drakeling is finished. The others still need the last few stages completed, but it's always a boost when the first one in a batch is done ^_^. I'll be putting up photos soon, but if you ordered a black drakeling with gold yellow and butter yellow, congrats ^_^.

I heard back from one of the dice manufacturing leads. So far they're having trouble getting in contact with their factory, so not sure what's happening there. I'm waiting on another one that I sent samples to as well so we've still got options.

The cutters got back to me - they had a family emergency so couldn't look at the samples I sent until this week. They think they can do it, which is positive, I've still asked for a sample cut before I order a bulk lot though. I've had issues with different cutters in the past where we had to spend a month recutting the majority of the order by hand, at which point cutting the whole lot by hand from the beginning would have been quicker and cheaper. With any luck they'll be able to get a sample to me sometime this week or early next (fingers crossed), which will let me work out if there's any pieces we need to hand cut, and then order the fabric and the cutting for the custom colour dragon bagons and double size dragon bagons (adult and elder dragons).

The samples went to the manufacturer last week for the manufactured dragon bagons. The tracking says it's at 'international arrival', so hopefully it'll get there soon.

Custom dragons - I've started on the first of the custom dragons. I've had to order a bunch more beads and metal scales. While I wait for those to come in I'll probably get on to the next one.

Manufactured bagthulhus are currently waiting on fabric options, but we have a reasonable back up option if nothing turns up by the end of this week. It's not exactly the shade I originally intended, but it's close and suitably horrifying.

Bagthulhu dice are being engraved. I'll follow up about that this week.

There's also quite a few folks who had errors come up when backerkit charged their cards. It might be worth checking your inbox and spam folder just in case you've been sent an error email.

It's only a little update, but some stuff has happened, so here we are

About ten days ago I ended up in ED (I think it's called the ER in the states) for about 6 hours. The current theory is a really nasty case of food poisoning. My helper also got hit, so we're pretty sure those smoothies had something to do with it. I thought I was being nice and getting a treat. Clearly I was wrong. I spent most of last week in bed.

In some sadder news, last week we also lost the old mare (horse) I helped to look after. She featured on my social media feeds sometimes. Her last day was spent having scratches and eating treats. I really miss her. She used to start yelling at me the moment she saw me appear with a bucket. Her two neighbours are missing her pretty badly. They don't like each other much, but they need each other now, so they're playing nice.

There's been some silence, but it's a busy silence.

They're all cut out and we're done matching up spikes and wings. This week coming we'll be stitching them together. Almost all of them are first wave so I'm doing the lot in one go. If we have a really good week I'd like to get them finished or close to it in that time. If not, it'll likely be two weeks to sew and finish them.

I've received the sample from the specialist. It's not exactly pretty, but to be honest that wasn't the point. It's got some structural adustments that are useful, and some that we wont be using, and some info on fabric options I wouldn't otherwise have gotten.

I've combined those changes with some of my own to hopefully suit the manufacturing process a little better, and it'll be going to the manufacturer this coming week. The one I'm aiming to work with has proven to be pretty quick with sample making, so with any luck we'll be on our way soon. Here's the two examples I've made for them currently, and I'm working on a rainbow one just in case ^_^.

Much of the past few weeks has involved cutting out almost identical pattern pieces and testing them out. Some of the changes have been as small as a mililmetre, others have been as large as several centimetres.

Question: This is just a thought at the moment, but how would you folks feel about coloured eyes on the manufactured Dragon Bagons? Like the black ones, but say purple for the purple and teal, or maybe teal, and maybe red for the red/black? I've seen some glittery purple safety eyes before, but I'm not sure what the sourcing situation is for them. It may not be something we can do, but I figured I'd see if it's worth investigating.

The cutter I was hoping would do the cutting for us has gotten back to me saying they can't do it. I've found another one though and I'm sending them a pattern to do a test cut. My plan is to basically get them to cut out as many pieces as they can accurately do, and we'll handcut the rest. The reality is even having them cut out a quarter of the pieces saves us a huge amount of time.

I'll be making the round and talking to folks with totally custom orders this coming week. I'll need to make these dragons one after the other since they'll be unique, and getting the bits mixed up would be a nightmare.

Another set of sample dice arrived. I'm not 100% sure about the colour just yet so I've relegated that to 'backup option'. I'm waiting on one more factory lead, then I'll look into other options.

I owe you a major apology for the radio silence. There's been some rocky stuff happening, but that's not an excuse.

The cutter is taking a while to get back to me so we're cutting these by hand, they're a small enough number that it shouldn't take too long by comparison to the other custom rewards. After some final tinkering with the pattern, we'll hopefully have these done soon. In some ways cutting them by hand is useful, they're the smallest, and it helps to use up the smaller pieces of fabric we have so I can just send entire rolls of fabric to the cutters.

I'm waiting for info from the design/soft toy specialist to finalise the pattern for these. It should hopefully arrive soon. I'm a bit concerned that we're going to run behind schedule because of delays with the shipping, but I'm going to keep trying to stay on schedule or close to it at least.

I'm hoping to have them cut out by a specialist using a computer guided system. As it is we may need to have press clicker blades made up, which is expensive, but I think it would be a good investment for the future. It takes more than half an hour to cut out a Dragon Bagon by hand. If even half of the pieces are be cut in bulk it saves a colossal amount of time.

Again, I'm still waiting on the parcel from the specialist, but I've already sent as much info as I can to my preferred manufacturer so I'm hoping they can work quickly.

I'm really concerned that we're going to miss the deadline to ship in July, and I feel I need to be up front about that, but we are seeing progress, albeit slower than I'd like.

The dice manufacturer has been unusually slow - they were pretty good the last round of dice I had made up, so I'm not sure what's going on. They finally sent me samples of the red and black dice they can do, which arrived a few days ago. To be honest I'm not completely happy with the colours. I've been investigating other options and hopefully something better will come up. If it turns out I can only get a multiset instead of individual dice, would you folks like that more or less?

The second batch of green and black dice should be done soon, I ordered them ages ago and will be following up this week.

Once I have my helper working away happily on the drakelings I'll be in touch to go through the finer details of these rewards and sort them out.

Ok, we have not yet hit the target, which I'm sad about, but more preorders are coming in. So I'm going to charge all cards EXCEPT those that have a custom rainbow dragon on their order. Swapping and adding items to orders is easier than doing refunds, so we can keep moving towards the target but we can get those other charges sorted, since folks seem keen to get that done sooner rather than later.

The original plan is to ship each order as it is completed. So if you have an item in the third wave and three in the first wave, your order would be shipped when the third wave item is ready. However depending on how things (like storage space) go, we may need to adjust this method.

All in all, I'm really sorry I haven't got as much progress to report as you deserve, but I promise I haven't forgotten you lovely folks, and we're working hard to get your draconic friends to you as soon as possible.